The MCC is organized by the Malaysian Informatics and Programming Society (MIPS). MIPS is registered as Pertubuhan Informatik dan Pengaturcaraan Malaysia with The Registry of Societies Malaysia (registration no.: PPM-013-14-23022012).

The Founding President of MIPS is Dr. Ong Shien Jin. He was the Delegation Leader of the Malaysian teams to IOI 2012 (Italy), IOI 2013 (Australia), IOI 2014 (Taiwan), IOI 2015 (Kazakhstan) and IOI 2016 (Russia). He graduated from Massachusetts Institute of Technology (MIT) with a Bachelor’s degree in Mathematics, and received his Ph.D. in Computer Science from Harvard University. 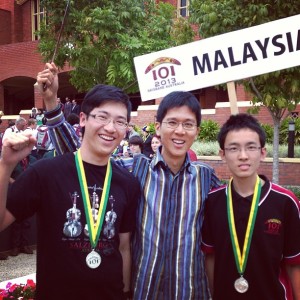 Dr. Ong (center) with the IOI 2013 medallists from Malaysia

The Founding Secretary of MIPS is Mr. Mohd Suhaimi bin Ramly. He was the Deputy Leader of the Malaysian team to IOI 2012 & 2013. He graduated from MIT with a Bachelor’s degree in Mathematics. He is involved in several national and international mathematical contests, most recently as the team leader of the Malaysian team to the International Mathematical Olympiad 2015 in Chiang Mai, Thailand. He runs the MCC 2015 Secretariat.

We can be reached at mcc@ioimalaysia.org